A lot has happened since our last report and the "Dirty Hands Club" has been very busy continuing their work on the Society's equipment. In early 2010, projects focused on inside jobs but with the early spring, work could start earlier than usual on outside work. 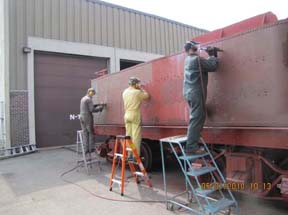 There was significant emphasis on the crane's tender to finally get it completed this year.

Photo a left:   In May 2010, volunteers were busy chipping away at the paint on the tender side using needle guns.

At the start of the year, there was still a lot of metal work to be done. However, much has been accomplished, including new access panels for the tank, new cross members in the tank and a metal floor covering in the coal bunker. A cold water sealer was applied to the inside walls of the tank and more primer painting was done on other parts of the tender. There were lots of other "odd jobs" to do and still more to come as the tender restoration nears completion.

Despite all the work on the tender, volunteers managed to move forward on the restoration of Canadian National Baggage Car No. 9627. The immediate emphasis has been to visually restore it on one side so Museum visitors can see it (from the parking lot) as it once looked.

Despite all this work, other pieces of equipment were not neglected. Work continued on rewiring the former Ottawa Central Railway Motor Car and this proved to be quite complex. However, the crew assigned to this work have done a great job and the Motor Car will be as good as new.

Other volunteers continued to work on Canadian National 1958 Pontiac Station Wagon Hy-Rail after the engine was returned and the rear axle replaced. Car 26 will be in top condition once all the work is completed. At the same time, some work was done on Canadian Pacific Caboose 436436 and our pride and joy, Thurso & Nation Valley Official's Car No. 27.

When summer arrived, the Dirty Hands Club gang also had to take on the various duties in the operation of the Museum's Shay locomotive. Nonetheless, work continues on our equipment. There is still lots to do so.